Biological aspects in prevention and treatment of pulp and periodical disease.

Biological aspects in prevention and treatment of pulp and periodical disease. 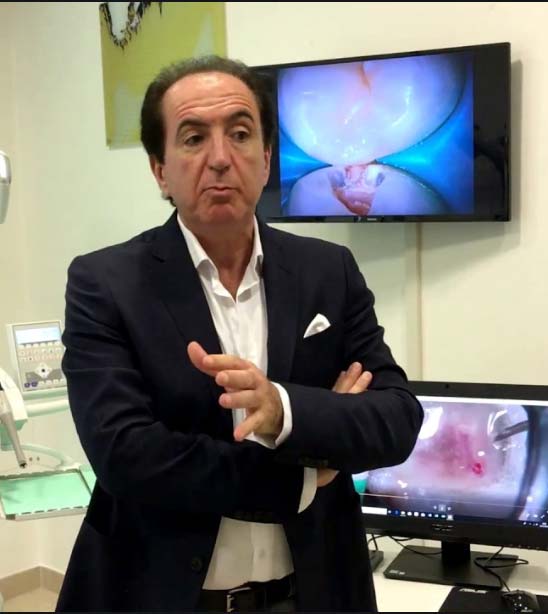 Rome in 1982, and his DDS from the same University in 1985. Since then on he has maintained

private dental practices limited to endodontics. In addition to his private practice, Dr. Ricucci was

Professor of Cariology at “Magna Graecia” University of Catanzaro, Italy in 2002 -2003. He served

in the Research Committee of the European Society of Endodontology from 1999 to 2005.

Dr. Ricucci’s primary research interest relates to pulpal and periapical tissue reactions to caries and treatment procedures, biofilms in endodontic infections, etiology of RTC treatment failure, pulp regeneration/revascularization. Since 1998 he has run his own histology laboratory and has developed considerable skills in hard tissue preparations for light microscopy.

Dr Ricucci has published 100 papers and has lectured both nationally and internationally. He has authored the Textbook and Atlas “Patologia e Clinica Endodontica”,  the textbook and atlas “Endodontology. An integrated biological and clinical view”, also translated into Russian and Japanese. He has also authored or co-authored sixteen book chapters.

Vital pulp therapy: when and how pulp vitality can be maintained in deep caries lesions.

Diagnostic tools in the diagnosis of reversible/irreversible pulpitis. Correlation between clinical and histologic pulp diagnosed.

Indirect pulp therapy. Why the concept is biologically wrong.

Partial and full pulpotomy as an alternative to root canal treatment.

Endodontic infections: their localization, morphology, and impact on the treatment outcome.

Patterns of microbial colonization of the root canal system.

Limitations in achieving a sterile root canal system with chemo-mechanical instrumentation. Do the “new technologies” work?

Success and failure in endodontics. An overview.

10% discount for groups from 4 person.

20% VAT is not included and is added to price.

Please fill up the registration form and we will confirm your participation within the same working day and send you all the payment information and detailed instructions.

DO YOU HELP WITH ACCOMMODATION?

For our guests, we are always negotiating a special price in the same hotel where the event will take place. All the booking instructions and links can be found on each event registration page.

After registration confirmation, we will issue you an invoice that can be paid via any international European bank payment.

DO YOU OFFER GROUP DISCOUNTS?

DO YOU ISSUE INVOICES FOR COMPANIES?

DO WE GET SPECIAL DENTAL POINTS/HOURS WITH A CERTIFICATE?

DO YOU HAVE SUPPORT AFTER THE EVENT?

Yes, after the event you can contact us if you have any specific questions regarding the presentation or practical part.

Most of our events are multi-lingual (English-Estonian-Russian) and we hire the best dental interpreters for our international students. Live interpretation is included in the price, just read the class description carefully to see if this specific class is translated.

WHY VISIT MEC EVENTS, AND WHY ARE THEY SO SPECIAL?

For every event that we organize we don’t only generate academic content, we try to come up with an event that has the best food you can get, the best entertainment, networking and memories that will stay with you for a long period of time.

HOW TO BECOME A SPONSOR?

Please contact our team via email info@meerhof.education and we will send you the sponsors’ package descriptions.

Booking your stay at the Nordic Hotel at a special member price and MTI code via email: Zanna.Mitjusova@nordichotels.eu
ADDRESS:

Made with ❤ by Nordic Expert